Does that title look Greek to some of you?  Well no worries as I'll explain.

"PFM=NO": When I first started my research, I had planned on getting PFM (porcelain fused to metal) for my final restoration teeth. PFM restorations have been used for many years...a tried-and-true option. A metal understructure in which the porcelain is fused to it and in turn the bridge sets on metal posts or "abutments" which are screwed into the implants. An example of a 4 segment PFM bridge below... 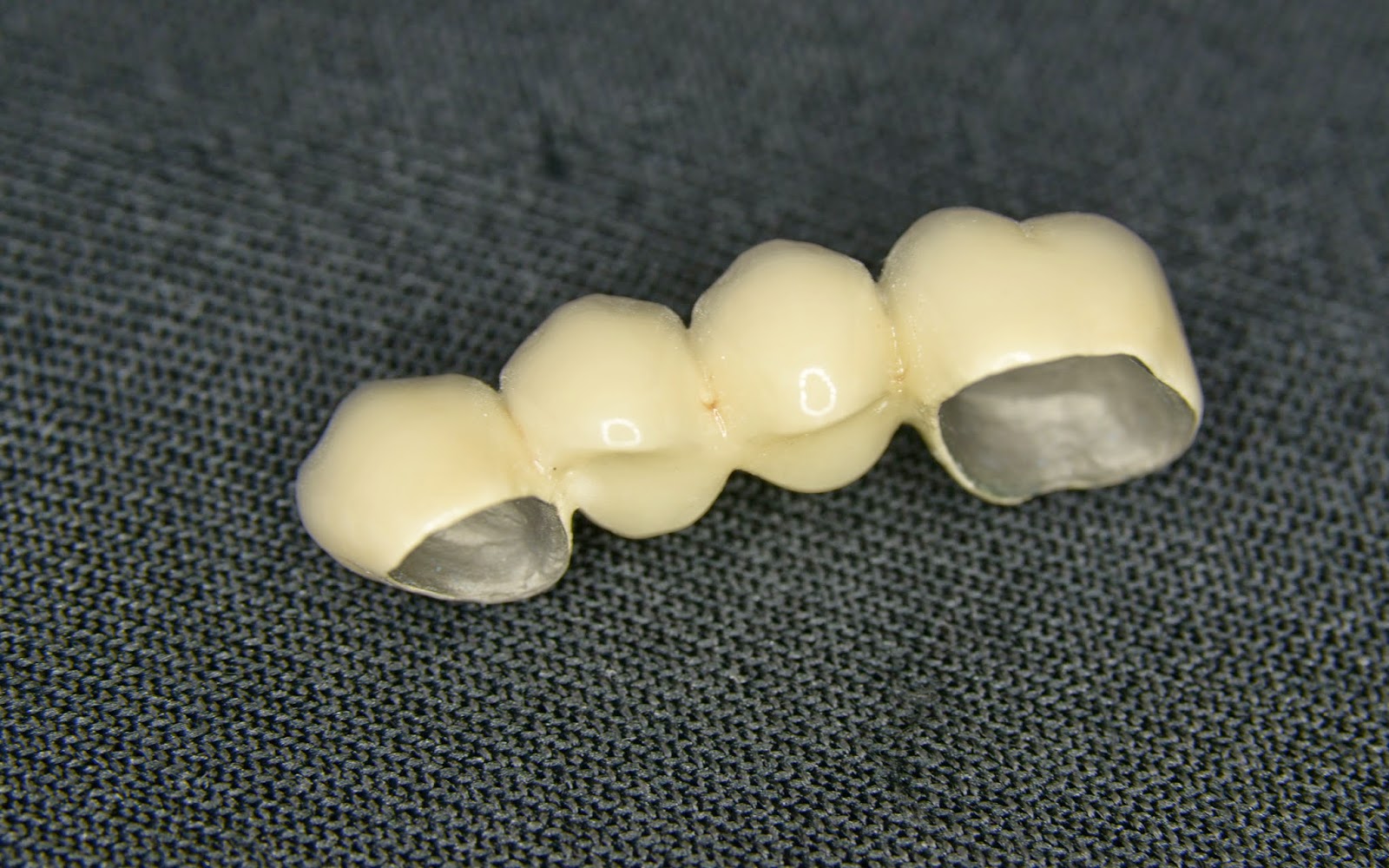 But some of it's disadvantages had me concerned. Porcelain can chip and also the metal of the understructure or the metal posts can show through as a shadow as seen in the below photos... 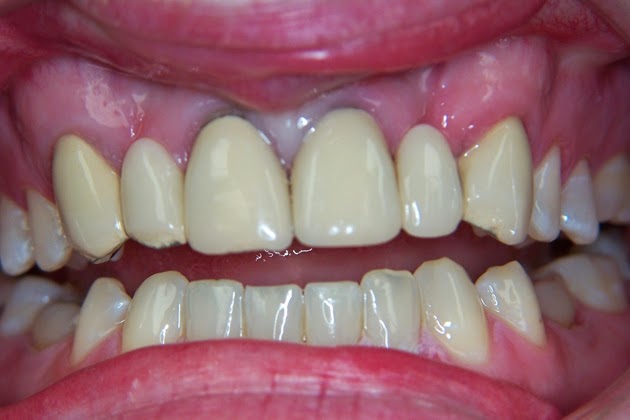 "PFZ=NO":  So I then started looking at PFZ (porcelain fused to zirconia). Zirconia is a white ceramic and very strong. Because it is white, there is no issue of the dark shadow such as in PFM restorations. Here is a 3 unit PFZ bridge... 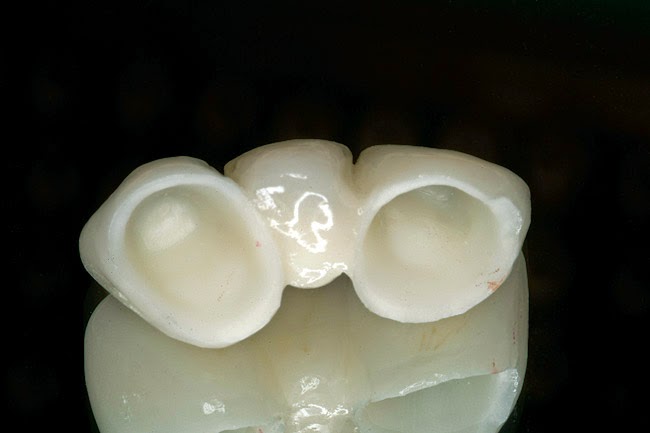 I'ts hard to see but there is a thin line where the porcelain is fused to the zirconia. Usually a bridge such as this would be attached to zirconia abutments instead of metal ones. Here is an example of a ziconia post/abutment and then a photo showing one next to a metal post... 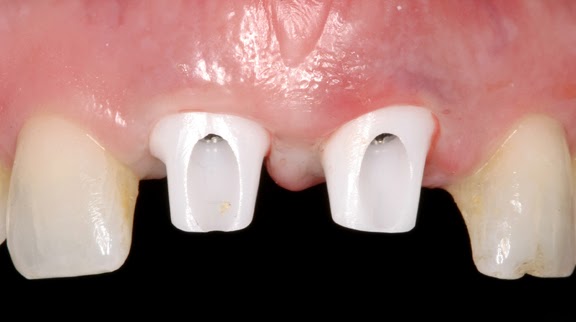 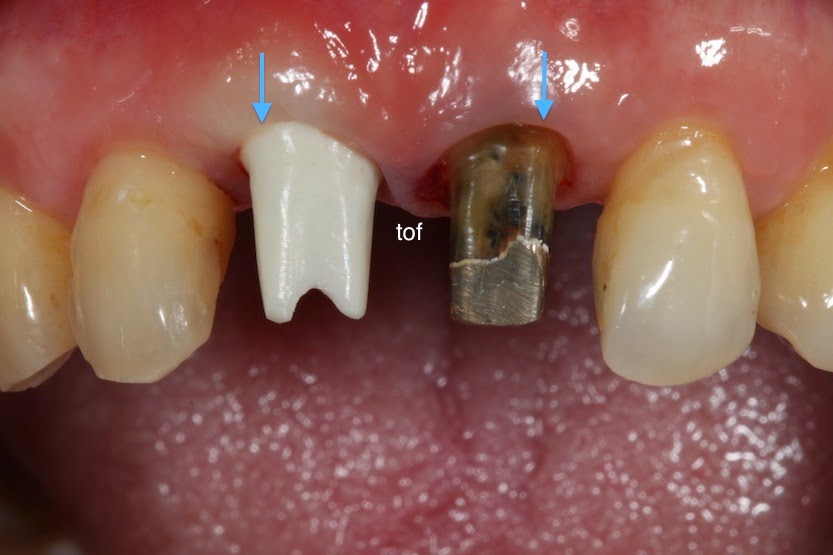 Have no idea what "tof" is, it's a photo I found on the net. Anyhow you can see why PFZ can be a superior solution to PFM. No dark metal shadow and very strong restoration. Here is a nice one I found of exactly how the zirconia crown goes on the zirconia abutment which in turn is secured to the implant via an abutment screw... 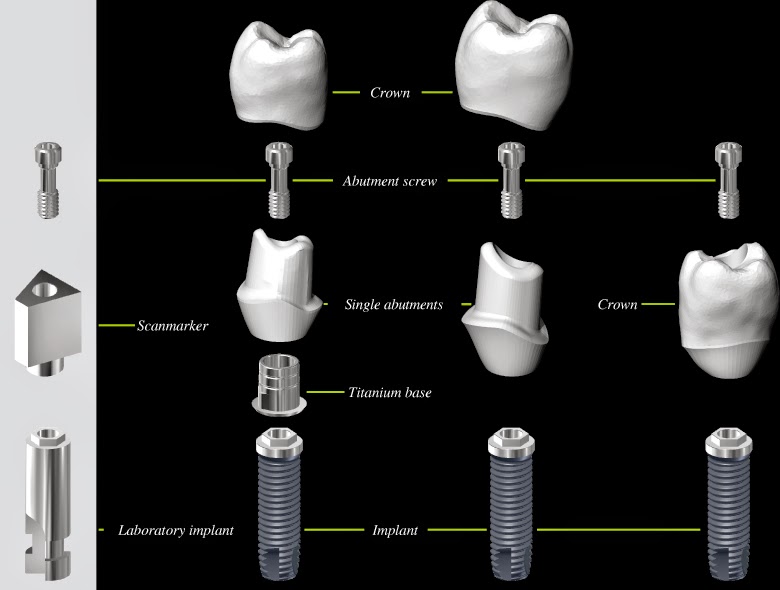 Now up until appointment #1/trip #2 this last Monday, I had decided on a PFZ restoration. I had weighed the advantages and disadvantages and thought this to be the best treatment plan for me. The disadvantages?  Well there is a thing called delamination in which the porcelain can separate from the zirconia. This, I hear, can usually be avoided if it's a high quality lab making the prosthesis'. But it was still a concern. Also there was still the worry of porcelain chipping over time and since I would have new porcelain upper teeth and original lower teeth, my lower teeth could be worn down over time by the porcelain.

"PZ-Si!": During Monday's appointment Dr. Prada suggested a different course of action...full contour Prettau Zirconia restoration (Zirkon zahn). He said that with this option I wouldn't have to worry about chipping or the new teeth wearing down my bottom teeth. He also stated that it's much stronger and with today's new formula it is just as pretty as porcelain. He stated he wanted the best for me and given my needs, where my implants are placed and other factors, that this is indeed the best possible treatment plan for me. I had already heard of Prettau Zirconia and heard of the guy that Dr. Prada uses to make them...Lorenzo Favini. He is considered by many dentists as not only the best in CR but one of the best in the world at creating beautiful, non-metal, full contour Prettau Zirconia restorations. (the below photos I don't believe are the work of Mr. Favini but rather from the Zirkon Zahn Prettau Zirconia website)

Now that picture above is a 8 unit PZ bridge with gum. You can clearly see the white zirconia understructure. Beautiful teeth no?  Dr. Prada said my bridges will be in at least 3 segments for a total of 10 PZ teeth (I still have 4 original molars in my upper so will be total of 14 upper teeth). So I would expect the largest bridge to consist of no more than 4 teeth and that would be for my front I believe. I also don't think I need or will have the fake gum. But as I said in my previous post, everytime I think I know what will happen I am usually wrong.

Thanks for reading. I must now get ready to head out for appointment #3/trip #2 with Dr. Gonzales.